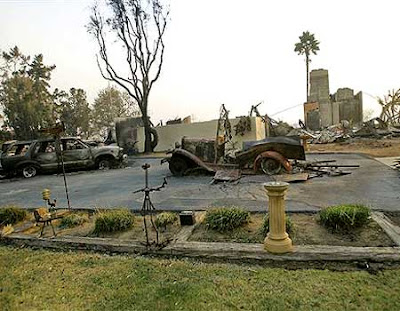 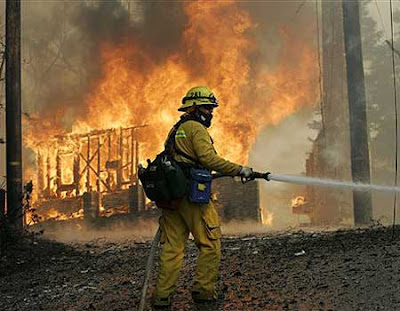 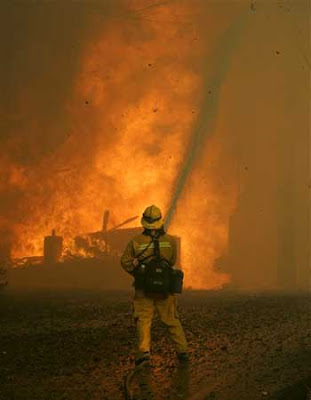 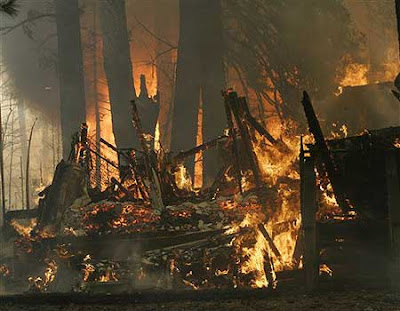 While the southern California fires continue to consume anything in it's path, thousands are getting the "all clear" to return to areas that the "beast" has visited with no idea what they will find. In what has been described as the largest evacuation in California's history, and still only one percent contained, the news that the windy conditions may subside over the next few days is welcomed by firefighters and residents that have remained in their homes waiting for the call to leave.

With no loss for fuel supply, and fed by the Santa Ana Winds, the conditions for a perfect firestorm has taken it's toll on an area where close to 50,000 more homes are still in danger. From Fox News it's reported " In San Diego County, authorities placed evacuation calls to 346,000 homes while over 560,000 people were ordered to leave."
Blame game begins............
It's being reported that U.S. Senator Barbara Boxer, who's district includes Southern California, has made this disaster political by stating that there are too many national guard in Iraq that should be home to help in fighting the fires. While fire officials say more resources could have always been supplemented, the conditions on the ground would have made little difference in this battle because of the natural fuel supply and the 30 to 50 mile an hour winds that made this inferno unstoppable.
I would ask this question to Boxer: "Why did you let these conditions develop in your region that many knew was a disaster waiting for the right time to strike?"

Here's a little info you may have missed Ms. Boxer:

California: Much of California will see above normal fire potential for the summer. Warm and dry conditions dominated California during May with near record breaking heat across the southern portions of the state. LINK
National Climatic Data Center, 15 October 2007:
This year has been very dry in southern California. As of September 25, Pasadena experienced its driest year since records began in 1878, and the mayor has asked Pasadena residents to voluntarily conserve water. LINK

Mechanical removal of the fuels has not kept up with the fuel build-up for several reasons. Some community covenants have restricted landowners since the 1920's from tree removal activities on private land within the National Forest. The Forest has not had an active timber harvest program for nearly 10 years. There are no lumber mills in southern California and now the current removal of dead and dying trees is difficult and expensive.

Changes in Wildland Fuel Conditions. Fire suppression activities over the last century have left much of the state’s wildlands filled with fallen trees, standing dead trees, and heavy undergrowth. As these fuels have built up, the risk of catastrophic fires has grown. In addition, several years of drought followed by insect infestations in Southern California and the Sierras have killed many trees, increasing the risk of large, dangerous fires in these regions of the state.LINK

Conflagration – A popular term for a large, fast-moving wildfire exhibiting many or all of the features associated with extreme fire behavior.
"Mechanical removal of the fuels has not kept up with the fuel build-up for several reasons. Some community covenants have restricted landowners since the 1920's from tree removal activities on private land within the National Forest. The Forest has not had an active timber harvest program for nearly 10 years. There are no lumber mills in southern California and now the current removal of dead and dying trees is difficult and expensive."
"I am very concerned that what we are seeing on the San Bernardino National Forest will happen again in many other forested areas in California. Forest conditions -- dense and overgrown -- on other national forests in California are similar to those on the San Bernardino."......JACK BLACKWELLREGIONAL FORESTER, PACIFIC SOUTHWEST REGION FOREST SERVICE

"The forest health situation on the San Bernardino and throughout the Pacific Southwest Region is very dynamic. The key to avoiding potential catastrophic wildfire is by taking a comprehensive, strategic approach with all involved organizations, and having all the necessary management tools available to use. Long-term success will also require building and maintaining relationships and cooperative planning that draws on the strengths of everyone involved."

Update: Sister Toldjah has Harry Reid blaming the fires on global warming. This is our democratic leadership?